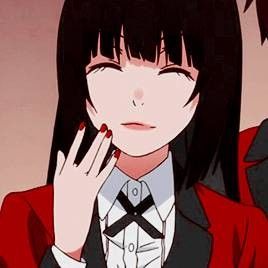 Kakegurui – also known as the anime “compulsive gambler” is a manga series from Japan. It is written by Homura Kawamoto. It is about an high class elite school in Japan in which the wealthiest student’s of the country take admission. But the catch is that they don’t teach academics in this school, a student is judged on the basis of his or her gambling abilities. The main character Yumeko Jabami looks beautiful, cheerful and simple at first glance but deep down she enjoys gambling and she does it just for the thrill it gives her. She does not care about any financial or social gains, unlike the other students she just gambles because she likes the thrill part. She is a second year transfer student at the Hyakkaou Private Academy. Her class mate is Ryota Suzui.

Jabami’s appearance is nothing less than beautiful. She is tall. She is pretty.

is charming. Her hair is black and she follows a hime cut. The color of her eyes are burgundy. But the interesting thing is, when she becomes thrilled, her eyes start to turn red. Her lips are pink in colour and glossy. Her figure is beautifully curvy. She wears the normal red uniform assigned to the students by the school. Her nails are always painted red in color and she wears a silver ring on her left thumb. Her outfit is a red blazer with black lines along the sides of it. In addition to that, a white button up dress shirt and a black tie on it. She also wears black stockings and black loafers in her feet.

Jabami is full of charisma and is very upbeat, who always tends to go popular around her circle. She has the ability to catch the attention of the whole school. She is also very good at cutting people off her life those who don’t like her.

has been like this since the day 1 in her school. She is against cheating and goes on a rampage when she finds out her opponent is cheating.  Her eyes turn red, in a calm way and her opponents become scared of her. She is usually friendly. She is a pro at gambling.

is able to decipher tricks and make strategies against her opponents very fast.

has no fear at all, because she does not gamble to win or lose, she just gambles for the thrill.

Mary Saotome : After losing to Yumeko, she became very angry and pissed. But Yumeko did not hold a grudge. Later, they allied and became friends to defeat the students council.

Ryota Suzui : He was the friend who showed Yumeko around school when she joined first. Little by little they became very good friends.

Itsuki Sumeragi : At first they were like enemies. However, as Itsuki realized it is probably in her best interest to be friends with Yumeko, she became close to her.

Yumeko lives alone in the manga, because her parents have passed away due to unknown causes.

Despite all this she was very wealthy, maybe her parents left her a large inheritance. 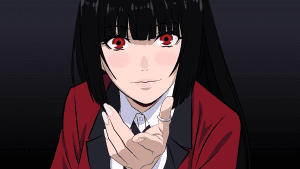